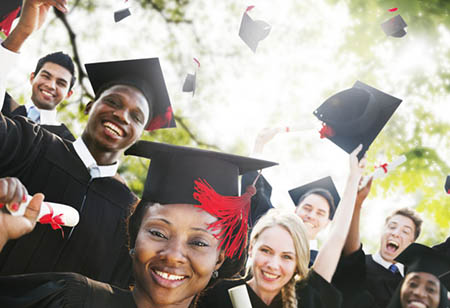 If the future of higher education in Africa is promising, the present requires investment to receive the large number of interested students. Of the 1.2 billion inhabitants of the continent, 60% are under 25 years of age. Thanks to a broad campaign in recent decades to improve participation rates in schools of basic education, the number of graduates in high school is greater than ever.

To adapt, higher education institutions (HEIs) across the continent develop new teaching plans and bet on international partnerships to meet the high demand for qualification.

As the continent’s economy diversifies, so does the search for a more qualified workforce. Necessity that, for a long time, meant the diaspora of African students.

According to a report by the Pew Research Center, immigrants from Africa in the United States are more qualified than their colleagues on the continent of origin. Of these, 69% aged 25 or older said they had at least some higher education experience.

Undergraduate enrollments in Africa almost doubled from 2000 to 2016: from 4.5 million to 8.8 million, according to Unesco data.

To meet the needs of this expanding community, governments in countries like Kenya and South Africa have set goals and realized the need to increase the number of doctorates by the thousands in the next decade. The objective is to improve the quality and size of academic teams and curb the exodus of students by expanding access to higher education.

One such initiative takes place at the University of Ghana. To meet the demand for teacher training, IES invited 20 academics from the “diaspora” to work together with the faculty. Since 2014, the year of its creation, the project has trained 400 African doctoral students.

The idea is to offer training and mentoring to graduate students and teachers, in addition to career guidance opportunities and scholarships. The main goal is to increase the quality of doctoral education in West Africa and retain talent.

However, avoiding the exodus of African students does not mean closing in on international opportunities.

According to Unesco, the future of higher education is increasingly transnational. With that in mind, programs from institutions like the African Institute of Mathematical Sciences (AIMS) offer attractions for those interested in developing higher and international research within African countries.

The program also allows African postgraduates with more than two years of experience and who are outside the continent to return permanently. The idea is that academics choose to carry out their research work in African territory.

Brazil has several initiatives for educational, academic and technical cooperation with African countries, mainly Portuguese-speaking countries such as Angola and Mozambique. Programs, projects and actions for the sharing of knowledge and good practices are fostered by student mobility and the exchange of students and education professionals.

The Ministry of Health’s Africa Core is an example. There, cooperation and international negotiation actions are developed.

The University of International Integration of Afro-Brazilian Lusophony promotes university extension, contributing to integration with other member countries of the Community of Portuguese Speaking Countries (CPLP).

UNESCO Science Report informs that, with the expansion of enrollments coming mainly from newly industrialized countries, the future of higher education depends on university networks that allow the sharing of its professors, courses and research projects. University exchange and distance learning opportunities come as an alternative.

In recent years, online classrooms have tried to improve the quality of higher education in Africa, but still face the skepticism of many students. Unicaf University, an institution founded in 2012 in Cyprus, offers programs focused on areas such as Business Administration, Education and Health.

Although digital classrooms try to expand the reach and improve the quality of higher education in Africa, there is still skepticism.

Online education offers the convenience of studying anytime and anywhere, an especially attractive feature for part-time students. The problem is the cost: about 4 thousand dollars per course.

The value, although high for the majority of the population, is available to a large part of the region’s middle class. And many students receive scholarships.

Even so, less than 10% of university-age students in Africa are enrolled in higher education, according to the World Bank. In comparison, in the wealthiest countries that are members of the Organization for Economic Cooperation and Development (OECD), this share is closer to 80%.

Africa’s longstanding public universities have struggled with pressure to expand their capacity without sacrificing the quality of education. Many are still reluctant to adopt the digitalization process and offer distance learning courses. However, to ensure better higher education in Africa, high investment is still required – which, historically, has only been possible for a small portion of the population.